“The more varied are our technical means, the greater the latitude for expression. . . . In order to create, the artist must make use of all the means that science places at his disposal: conserving or limiting oneself to the methods of times gone by is absurd. . . . Simple logic and facts therefore bring us to the use of new models, to the steadfast pursuit of modernism in art.”

Edgar Brandt – “Lecture to the Graduates of the Technical Professional Schools” Paris, February 10, 1922.

Atkinson-art, infused and inspired by the majesty of Bodmin Moor, one of the remotest parts of Southern England, often described as windswept and rugged, ”but to me the moor is a sea of land , a 360 horizon, untamed ancient lands, home to our Bronze Age forefathers and many since.” says Charles Atkinson.

As an award winning designer artist blacksmith working from my traditional workshop – ”a sort of Heaven on Earth – I combine traditional blacksmithing and metalworking techniques, some of which push the metals involved to their limit.’’

Energy and spirit, ingredients to life, are put into otherwise inanimate pieces of metal – breathe life into Steel – for instance the pure Silver finish to the Serpents allows movement and promotes their chameleon uncertainty by blending and taking on their surroundings through reflection.

Perhaps the energy and spirit is already there and it’s a case of unlocking it, releasing it, realising its potential, letting it flow, begin to be sculpted, changed, form an identity, a persona.

Titanium ‘Metal of the Gods’ which in the last decade or so has become the ‘new’ metal for jewellers and jewellery. Titanium or Ti, first discovered in Cornwall in 1791, is notoriously hard to work, resistant to corrosion in even the most hostile environments and has the highest strength-to-density ratio of any metallic element found on Earth.

For many years I ran my artisan forge just outside Oxford trading by the name of ‘Iron Awe’. As a Blacksmith I designed and made interior and exterior iron works including renovation and restoration work.

The work was varied and included making ironwork for the film ‘Braveheart’, engineering bespoke display solutions for prehistoric artifacts for the Oxford University Museum for Natural History; designing and forging entrance gates and railings for the Colleges of the University of Oxford, Christchurch Cathedral, Le Manoir aux Quat’ Saisons, amoung many others – if you walk around the centre of Oxford you will see a lot of my work.

In 2001, for my design and post war restoration of St Peter’s College main entrance railings incorporating the Cross Keys of St Peter, the ‘Keys to the Kingdom of Heaven’, I received an award for my “contribution made to the preservation and enhancement of Oxford’s heritage” by the Oxford Preservation Trust in conjunction with St Peter’s College, Oxford.

During that time I had sponsored two apprentices through college, the first became National Apprentice of the Year 1996, he was recognised by The Worshipful Company of Blacksmiths and awarded at a ceremony in London.

Eight years into my business and I was over trading. With an order book of two and a half years work I reluctantly had to turn down the opportunity to work on Windsor Castle and the Tower of London.

I worked off the order book, sold the business with some gear, keeping what I needed. I then bought a traditional ship ‘Josefine’ a Danish 1931 gaff rigged ketch, oak on oak, an extremely seaworthy vessel,  sailed into Charlestown out of Gibraltar in 2004. I coded the vessel with the Maritime Coastguard Agency, achieved my skipper ticket and went to sea classic yacht chartering for a decade or so.

Whilst I enjoyed being a Blacksmith I was always drawn to the more artistic side of design, engineering and metalworking. I also wanted to explore a more varied range of metals, working and finishing, so founded Atkinson-art in order to make the finest metalwork in any metal.

Working with Titanium which was first discovered in Cornwall and Bronze which chimes with the local Bronze age sites, among many other metals, is both challenging and rewarding.

The temperate climate of Cornwall has an appeal, heated by the gulf stream, much like the ancient farmstead that is now home and work, situated in the shadow of the sacred Tor Brown Willy – I moved my workshop, all 25 tons, to the middle of Bodmin Moor, set up my internet business, created brands, designing and making  product ranges as well as offering Bespoke: any metal, any scale.

The magic of the internet allows anyone from around the world to share the passion for fine wrought ironwork, Chef’s knives, metal art and jewellery, handmade on Bodmin Moor, Cornwall, England.

Previous notable works by Charles Atkinson, some of which can be seen on the gallery page, include:

Special thanks to the Rolls-Royce and Bentley owners club for their kind invitation to celebrate Bentley’s centenary  at the Grosvenor House Hotel, London, June 2019. 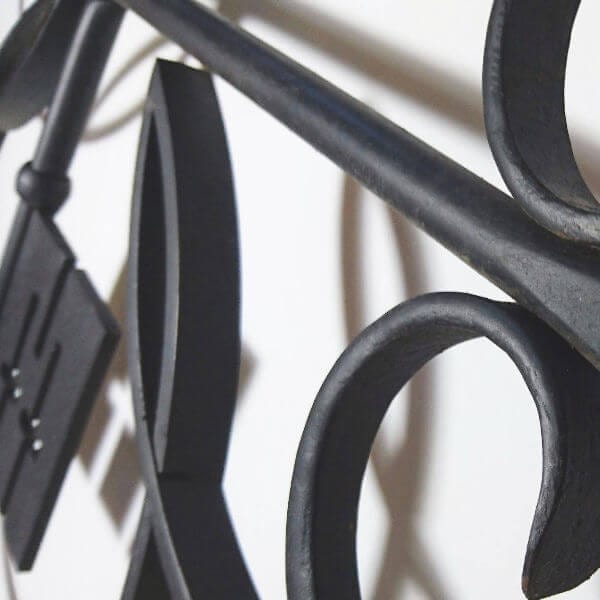 These are some of the traditional methods Charles uses, which have been used by blacksmiths for centuries.

Shaping and moving of hot metal, mainly iron and steel, by means of extreme force delivered locally by a hammer striking the hot metal on an anvil. This can be done manually or mechanically, or with a combination of both depending upon the size, section and type of metal being worked.

Shaping of a sheet of malleable metal by localised hammering to various degrees from the reverse side to create a design in relief. The material will require annealing (heating up to a dull red) from time to time to relieve stresses built up in the metal. The relief can increase in depth as long as there is enough material thickness to cope with the stresses of being stretched.

This is similar to repoussé but carried out on the presentation side, usually carried out in conjunction with and to highlight the repoussé work.

Taking inspiration from past Master Blacksmiths in particular Jean Tijou, Fritz Kuhn and the Master of Art Deco ironwork Edgar Brandt, from his workshop set within the ancient lands of Bodmin Moor Charles Atkinson has refined and combined traditional blacksmithing and metal working methods, some that break convention. Using a combination of metals and techniques he creates extraordinary Luxury Metal Art and exquisite Jewellery.

Why can’t we harness the energy from the tidal movements around our shores that happen every day? Why haven’t we?

His patent No: GB2443636 for ‘Apparatus, installation and method for electrical power generation’ was granted on 18th March 2009, the original application was filed 8th November 2006.

As an ex-commercial skipper of a classic 1931 gaff rigged ketch Charles draws on his knowledge of the sea, influencing the robust design, installation, metals and materials involved. He has further patent applications for future filing.

Charles Atkinson is the Director of Tidal Diamond Ltd, registered at Companies House No:04752364, a company he formed to progress the technology.

Design, Make, Manage, Metal Art of any scale, in any Metal.